DUBAI, Feb 4 (2019) – RIA Novosti. Pope Francis met with the leadership of the UAE during the first-ever visit of the head of the Roman Catholic Church to the Arabian Peninsula, the UAE news Agency WAM reports on Monday.

According to the Agency, during the meeting, the UAE leaders expressed their conviction that the visit of the Pope will contribute to “strengthening the values of dialogue and human brotherhood, coexistence, cooperation and respect between all peoples.”

Also on Monday, the head of the Roman Catholic Church is scheduled to meet with the head of the authoritative Islamic University al-Azhar Sheikh Ahmad al-Teib and other Muslim religious leaders. The meeting will take place within the framework of the global conference on human brotherhood, specially organized in Abu Dhabi, to which religious and public leaders from all over the world are invited.

Pope Francis’s stay in the UAE will end with a public mass on February 5 at the Zayed Sports City Stadium in Abu Dhabi, which is expected to be attended by about 135 thousand people.

In the UAE, 2019 was officially declared the Year of tolerance and tolerance. 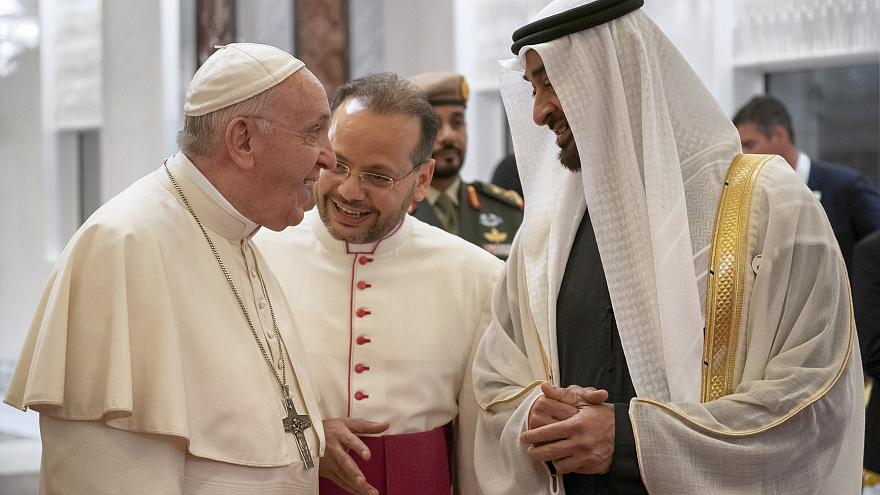 Abu Dhabi, 6 February, REGNUM. Speaking in the presence of members of the Royal families of the UAE, the head of the Catholic Church recalled that “all people have equal dignity, and no one can be the master or slave of others.” “Either we build the future together, or we lose the future,” said the Pontiff…

MOSCOW, February 3 (2019) – AIF-Moscow. Pope Francis arrived in the United Arab Emirates on a three-day visit. The plane with the Pontiff on Board landed at Abu Dhabi airport around 22: 00 local time, according to RIA Novosti.

This is the first ever visit of the head of the Roman Catholic Church to the Arabian Peninsula, in countries where Islam has the status of an official religion. Before the flight, Pope Francis explained on Twitter his journey to Abu Dhabi with the desire to establish a dialogue with Muslims in order to “go together on the path of peace”.

The Pope’s stay in the UAE will end on February 5 with a public mass at the stadium in Abu Dhabi. According to the Vatican, this Arab country is home to about 1 million Catholics.

Havana, 12-13 February (2016).  Discussing the topic of religious tolerance, it would be appropriate to quote a few points from the unprecedented joint statement of Pope Francis and his Holiness Patriarch Kirill of Moscow and all Russia, which was made there. 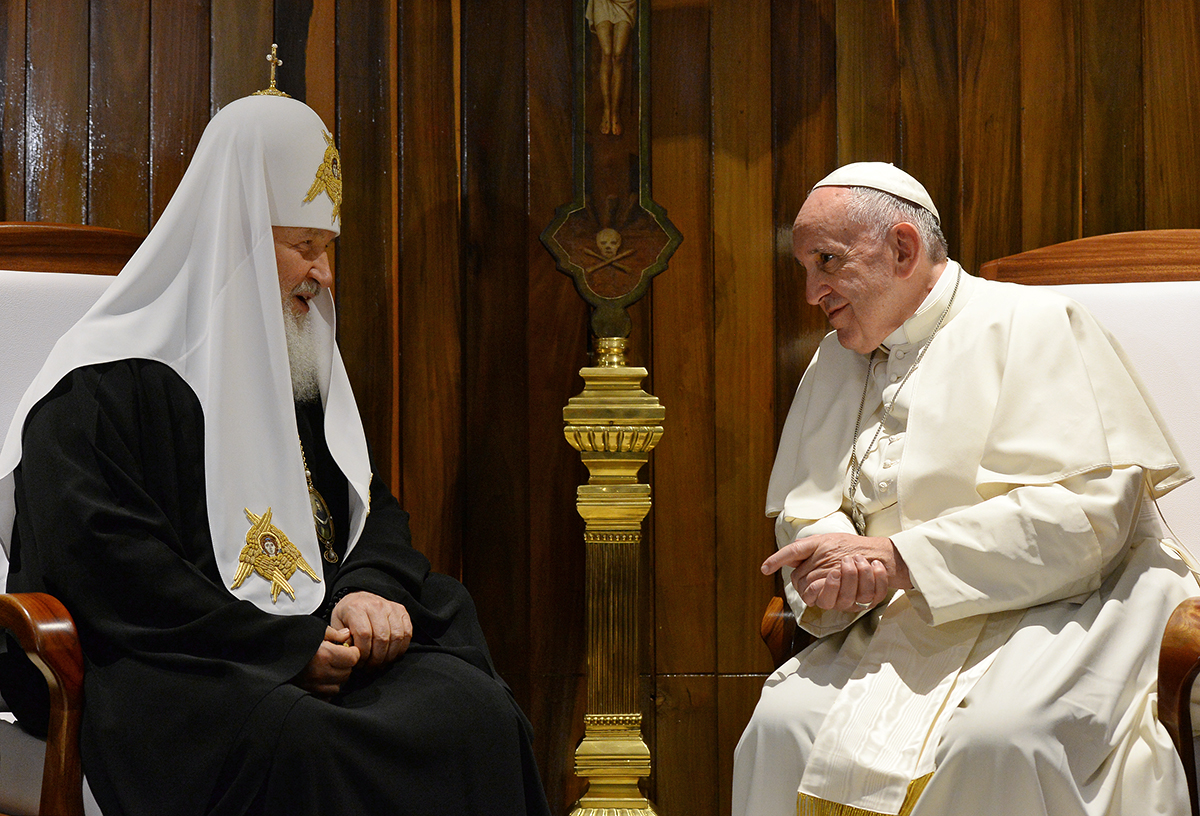 “In this troubled era, interreligious dialogue is necessary. Differences in understanding religious truths should not prevent people of different faiths from living in peace and harmony. In the present circumstances, religious leaders have a special responsibility to educate their flock in a spirit of respect for the beliefs of those who belong to different religious traditions. Attempts to justify criminal acts with religious slogans are absolutely unacceptable. No crime can be committed in the name of God, “for God is not the God of disorder, but of peace” (1 Corinthians 2: 1). 14: 33)”.

“Orthodox and Catholics are United not only by the common Tradition of the Church of the Millennium, but also by the mission of preaching the gospel of Christ in the modern world. This mission presupposes mutual respect of members of Christian communities and excludes any forms of proselytism.”

“We are not rivals, but brothers: from this understanding we must proceed in all our actions in relation to each other and to the outside world. We urge Catholics and Orthodox in all countries to learn to live together in peace, love and unanimity among themselves (Rome. 15: 5). It is unacceptable to use inappropriate means to force believers to move from one Church to another, neglecting their religious freedom and their own traditions. We are called to bring to life the Covenant of the Apostle Paul and “not to preach the gospel where the name of Christ was already known, lest we build on another’s Foundation” (ROM. 15: 20)”.

“Family is the natural center of human life and society. We are concerned about the family crisis in many countries. Orthodox and Catholics, sharing the same idea of the family, are called to bear witness to the family as a path to Holiness, which is the fidelity of spouses to each other, their readiness for the birth and upbringing of children, solidarity between generations and respect for the infirm.” This meeting in fact showed that in the” Christian world”, despite the divergence of doctrines, positive processes are beginning in favor of all Christian communities of the world, many of which are now experiencing persecution for their faith. (The full text of this statement can be found on the ROC website).

The international day of tolerance was approved in 1995 by UNESCO, since then every year representatives of different faiths gather at the conference 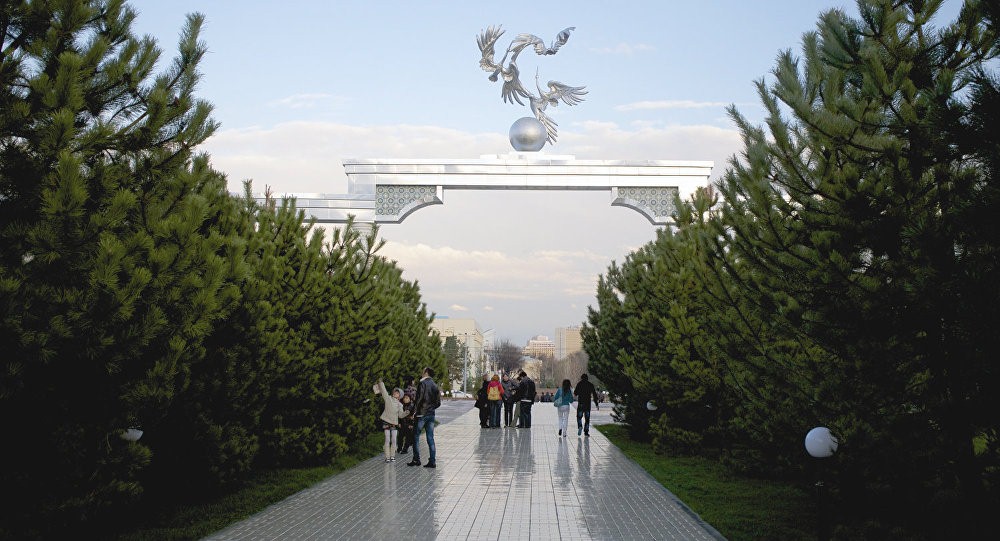 TASHKENT, November 17 (2017) — Sputnik. The international scientific and practical conference “Interfaith dialogue and religious tolerance-guarantee of stability of society”was held in the capital. It was organized by the Committee on religious Affairs under the Cabinet of Ministers, Tashkent Islamic University and the UNESCO office in Uzbekistan.  FLICKR / STEFANO MORTELLARO Uzbekistan was named the most tolerant country in the CIS. Every year the conference brings together representatives of different faiths for a General discussion, reports IA “Jahon”. The event is dedicated to the International day of tolerance, which was approved in 1995 at the 28th General conference of UNESCO. The universal Declaration of human rights adopted by the UN States that everyone has the right to freedom of thought, conscience and religion. These rights and freedoms are also enshrined in the Constitution of Uzbekistan. “Tolerance is a harmony in the diversity of opinions, views and cultural characteristics of different peoples. It is important to educate our youth, telling how these foundations were formed, what we should keep them”, — said the Director of the National center for human rights, Professor Saidov. He said that the book-album “Uzbekistan is our common home” was published, the pages of which reflected the multifaceted work of cultural centers. Statements were also made to the effect that it was important to develop the concept of a culture of peace. “Tolerance can be exactly the tool that will become the basis for the development of long and lasting relations between all countries. It does not imply indifference. Rather, on the contrary — it contains a sense of belonging to nationalities, peoples and religions”, — said the head of the UNESCO office in Uzbekistan K. Pikkat.

Tolerance for Russia is of particular importance – Putin

Russian President Vladimir Putin confirmed on behalf of all G8 leaders the commitment of G8 countries to the principles of tolerance and stated that tolerance is of particular importance for Russia. “If the Russian society could not achieve a certain harmony between the interests of representatives of numerous confessions and nationalities, we probably would not be able to create a single and centralized state, “Putin said during a meeting with representatives of the youth eight.

As Vladimir Putin stressed, ” tolerance is the basis of Russian statehood, since Russia has been invested as a multi-ethnic and multi-religious state throughout its thousand-year history.”

As reported by Interfax, the President of the Russian Federation as the current Chairman of the G8 said on behalf of all the leaders that the G8 pays great attention to this problem. “It is obvious that without the solution of this issue, without the tolerant attitude of people to each other, it would be impossible to solve any other problem,” the Russian President said.

He acknowledged that the issues of tolerance and tolerance “are related to the problems of education and the problem of adaptation of migrants”. “This is one of the key problems of human development,” he said. 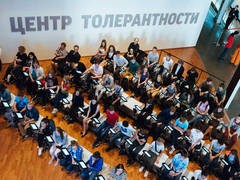 Award, the UNESCO Madanjeet Singh for the promotion of tolerance and non-violence of 2016 will be awarded to the Russian Federal scientific-methodological centre in the field of psychology and pedagogy of tolerance (tolerance Center) during the ceremony, which will take place in the headquarters of UNESCO on 16 November at 18:30.

The tolerance centre was selected on the recommendation of the Jury in recognition of its wide range of activities, including scientific and educational programmes aimed at promoting dialogue between different religious denominations and worldviews, with a special focus on young people.

The UNESCO-madanjit Singh prize for the promotion of the ideals of tolerance and non-violence was established in 1995 on the occasion of the United Nations year of tolerance and the 125th anniversary of the birth of Mahatma Gandhi. The award aims to promote a spirit of tolerance in the arts, education, culture, science and communication.

The $ 100,000 prize is awarded every two years to individuals or organizations for outstanding contributions to tolerance and non-violence. The winners are chosen by an International jury, whose members include Professor Nadia Bernoussi (Morocco), Marek Alter (France) and Dr. Kamal Hossain (Bangladesh).

The tolerance centre has been awarded the madanjit Singh Prize for promoting tolerance and non-violence.

On 16 November, a ceremony was held at UNESCO headquarters in Paris to award the laureates of the Prize for the dissemination of the ideals of peace and non-violence. Nada al-Nashif, UNESCO Deputy Director General for social Sciences and Humanities, presented an honorary diploma to Alexander Boroda, Director General of the Jewish Museum and Tolerance Center.

“The madanjit Singh prize for spreading the ideas of tolerance and nonviolence is an excellent evidence that we are moving in the right direction. Our cooperation with UNESCO has been a great start, and we are not going to rest on our laurels and will only move forward. And, of course, the best result of our work will be a modern society, the key principles of which will be tolerance and mutual respect.”

The award, named after the artist, writer, diplomat and goodwill Ambassador of UNESCO – madanjit Singh, is awarded every two years.

This year, the international jury, consisting of representatives of UNESCO member States, unanimously chose the Russian Center for its scientific and educational programs aimed at promoting dialogue between different religious confessions, including with the involvement of young people.

The high award was presented in celebration of the international day of tolerance – November 16. In Moscow, this date is devoted to a special program “tolerance Week”, unique in idea, process and involvement of children in the social dialogue about the culture of different countries. Award Madacide – confirmation of the high evaluation of the activities of the Center for International professional community.

“The tolerance center is our partner in the implementation of the state national policy. It is very important for us that there are private organizations in Russia that deal with such key issues for the state and society as tolerance and the development of intercultural dialogue. The UNESCO prize is a high appreciation and international recognition of the professionalism of the staff and the quality of the tolerance Center’s programs. We congratulate our colleagues, wish them further success and are proud that the UNESCO Prize was awarded to the organization from Russia”. Igor Barinov, head of the Federal Agency for nationalities.

Private institution of additional education “Federal scientific and methodological center in the field of psychology and pedagogy of tolerance” – organization-successor of practical experience gained by the Center of tolerance of the Jewish Museum, which successfully conducts socio-pedagogical, socio-psychological activities in the field of formation of attitudes of tolerant consciousness of young people since 2012.

The center conducts scientific, methodological and educational activities, the main purpose of which is to promote the strengthening of Russian citizenship among young people, the translation of a culture of peace and cooperation, a positive dialogue of people of different cultures, religions and worldviews by psychological and pedagogical methods. The center’s activities are primarily addressed to educational organizations and teachers of the Russian Federation. Through full-time and distance learning, the Center transfers to educational organizations innovative developments and technologies in the field of civic education of young people, aimed at harmonizing intercultural and intergroup relations, promoting the formation of a harmonious social identity in its civil, ethnic and other aspects.